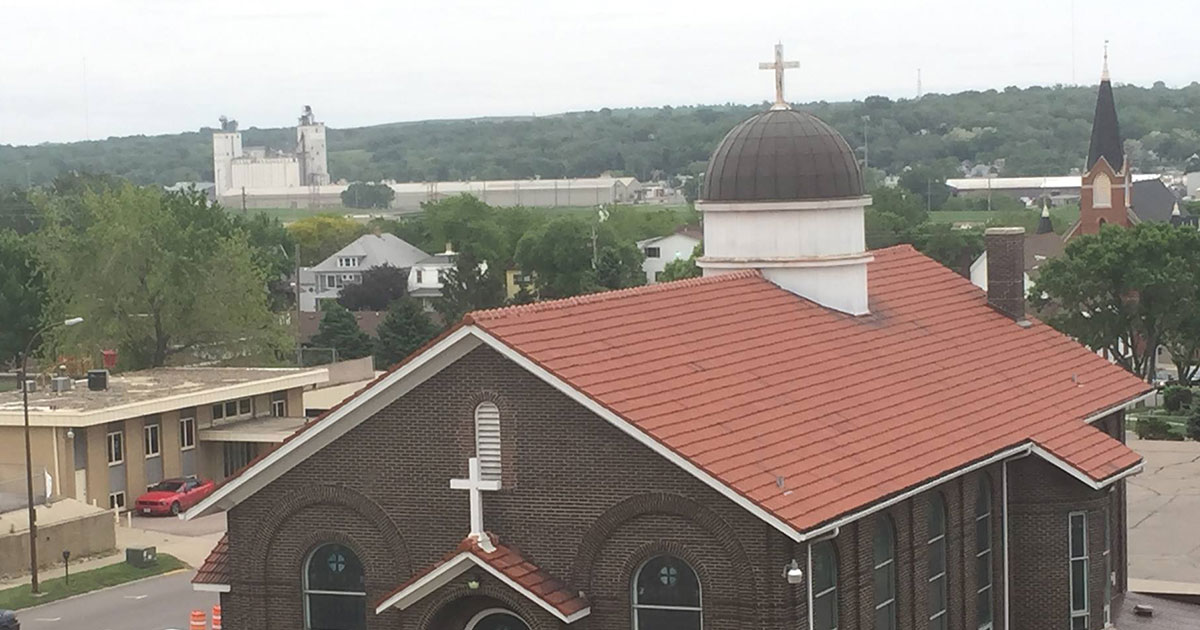 The history of the Holy Trinity Greek Orthodox begins in 1918, when more than five hundred Greeks, living in Sioux City, attended a meeting at a Knights of Columbus Hall. Until then, the more than a thousand Greeks who had come to work in Sioux City’s meatpacking industry traveled to Omaha, Nebraska, one hundred miles to the south, for occasional service. Led by Paikos K. Pappaphilipopoulos ( who later Americanized his name to Peter Nelson), the Greek community started a fund drive and purchased a corner property near downtown for $35,000 in 1920. The parcel included three houses, one of which they used as a temporary church.

The first pastor was Fr. Constantinos Harvelas. In spring 1925, the community proceeded with construction of a permanent church and laid cornerstone on Annunciation Day. The church edifice, designed by William M. Steele, was completed by September, and the formal dedication took place on the 4th of October, 1925. The church continues to serve as the parish house of worship to this day. It is the oldest Greek Orthodox church building in Iowa and, in physical size, the largest. Holy Trinity Church is listed on the National Registry of Historic Buildings and is one of four churches selected by the local museum for its “Sacred History Tour” of the city.

In July 1928, a group of mostly World War I veterans organized Sioux City Chapter 191 of AHEPA under the leadership of George M. Paradise, who went on to become a municipal judge. They immediately began a campaign to eliminate the church’s debt, and purchased $5,000 in bonds that they donated to the parish.

A high point of the parish’s history was the celebration of its 25th anniversary and the visit of Bishop Athenagoras Kokinakis of San Francisco. Delegations came from communities throughout the tri-state region. The 1950’s were a period of progress for Holy Trinity. Fr. Constantine Hallick, the parish’s longest tenured priest, and the board of trustees started the annual church bazaars as a fund-raising source. The bazaars eventually were replaced by Grecian Dinners which continue to serve as revenue sources.

In February of 1996, the dedication and perseverance of the community was tested by a fire which gutted the church’s interior. A sixteen member renovation committee raised the $600,000 needed to restore the interior. Under the direction and efforts of architect Christ Kamages of San Francisco, iconographer Elias Damianakis of Florida and woodcarver Steve Kavroulakis of Crete, the community acquired a new altar, sanctuary, narthex, iconostasion, and iconography. Metropolitan Iakovos of Krinis, rededicated the church in June 1999 and called Holy Trinity “a jewel of the Midwest.”